Substances that produce pleasurable sensations in the brain and body have the potential to be abused. Addiction may include alcohol, stimulants, depressants, prescription medications, and more. 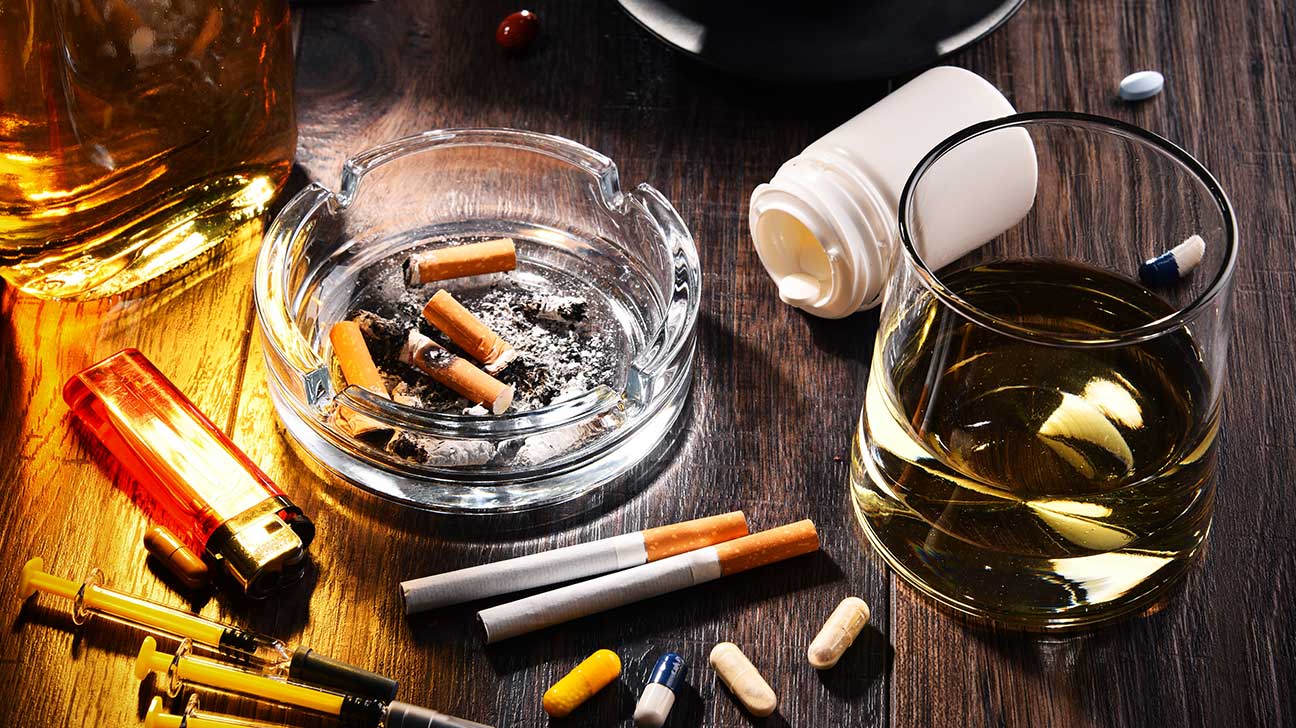 Drug or alcohol addiction, also referred to as substance use disorder, affects a person’s brain and behavior in a way that renders them incapable of controlling how much of the drug they use.

The longer a person abuses a substance, the more they will have to use it to feel the same pleasurable effects. As tolerance increases, it becomes increasingly difficult to go without the substance.

Substances such as opiates, alcohol, and other illicit and prescription drugs can cause a range of health problems including organ failure, mental illness, cognitive decline, and overdose death.

How Does Drug Addiction Start?

Understanding drug use and addiction is not easy, as there are several factors at play when someone starts abusing substances.

Risk factors for drug addiction include:

Addictions do not typically take hold after the first time using a substance. Prolonged misuse, however, can easily lead down a path to physical dependence and addiction.

Signs Of A Drug Addiction

Addiction is a progressive disease of the brain that can affect all aspects of your life.

Often, the warning signs of substance abuse are noticeable, while other times people may not notice the signs until it’s too late.

Common signs of addiction include:

While drugs may range in addictive potential and potency, certain substances pose a much greater risk to your health and mental well-being than others.

There are dozens if not hundreds of addictive substances in the world today, not to mention the various cutting agents used to create even more dangerous drugs.

Drug addictions are grouped below by drug category, such as depressants, stimulants, hallucinogens, and other substances.

A depressant, or central nervous system depressant (CNS) is a drug that lowers neurotransmission levels in the brain. This reduces stimulation and produces a feeling of calm and relaxation.

CNS depressants have a number of physical and psychological effects on those who use them. They may include dilated pupils, confusion, slowed pulse, slurred speech, fatigue, and more.

Alcohol is the most commonly abused substance in the world, and also one of the most dangerous. It comes in a variety of forms including spirits, beer, and wine.

The more a person drinks over time, the more the brain and body are affected. Chronic alcohol abuse may lead to addiction, liver disease, brain damage, and life-threatening withdrawal symptoms.

Opioids include both illicit and prescription drugs and are some of the most addictive and harmful substances on the market today.

Types of prescription opioid painkillers include:

Prescription opioids in the United States are prescribed primarily for pain relief, but due to their strength are also very addictive. Over 75,000 Americans died from opioid overdose in 2021.

Illicit opioids are often sought when a person no longer has access to a prescription and must turn to the black market.

Examples of illicit opioids include:

According to the National Institute on Drug Abuse, approximately 80 percent of people who admit to heroin abuse say that they used prescription opioids in the past.

Benzodiazepines, or “benzos”, are prescription medications used to treat anxiety, sleep disorders, convulsions, and more. They are effective due to their sedative and muscle-relaxing properties.

Benzodiazepines used to treat anxiety include:

Benzodiazepines are generally safe when taken over a short period of time and as directed. Long-term use may lead to physical dependence, withdrawal, and addiction.

Sleep medications are a category of CNS depressants that work similarly to benzodiazepines but typically don’t reduce anxiety.

Non-benzodiazepine sleep aids are known to have fewer side effects and addictive potential than regular benzos, but can still become addictive if taken over a long period of time.

Some of the most severe side effects of sleep aids occur when people mix them with other substances such as alcohol, opioids, and other sedatives.

Barbiturates are a group of drugs known as sedative-hypnotics and have sleep-inducing and anti-anxiety properties. When taken in excess, barbiturates can cause coma and death.

Some of the most prominent prescription barbiturates include Fioricet (butalbital), Luminal (phenobarbital), Amytal (amobarbital), and Seconal (secobarbital), among others.

Marijuana is the most commonly used illegal drug on the market today. It is derived from a plant and typically used by oral ingestion or smoking in a pipe or marijuana cigarette.

The effects of cannabis include sedation, mild hallucinations, and relaxation. While marijuana is not considered physically addictive, it does have the potential to become psychologically addictive.

Stimulants, also known as “uppers” are drugs that increase the activity of the central nervous system. These substances speed up the body’s systems and create pleasurable, invigorating sensations.

Cocaine is a highly addictive drug that comes in a powder form that can be snorted and injected. In rock form, it’s known as crack cocaine and is smoked from a glass pipe or inserted rectally.

Cocaine produces a powerful but short-lived high that can quickly create dependency after repeated use. Signs of use include dilated pupils, runny nose, excitability, and mood swings.

Many drug dealers or “cooks” illegally manufacture methamphetamine in makeshift meth labs. This substance can be snorted, intravenously injected, or smoked.

Abusing meth may lead to several detrimental effects to mental and physical health due to the toxic, often poisonous ingredients present in methamphetamine.

Some of the common effects of meth abuse include meth mouth, skin sores, a higher risk of mental health issues such as paranoia and anxiety, sexually aggressive behavior, and more.

They are also used as a study aid, to stay awake, and used to suppress appetites.

Kratom is derived from the leaves of a tropical tree in Southeast Asia. When consumed in low doses, people may experience stimulating effects such as physical energy, talkativeness, and increased alertness.

Kratom is typically abused by oral ingestion in the form of a tablet, or crushed up and smoked in a pipe or cigarette.

Currently, Kratom is not considered a controlled substance, and the Food and Drug Administration (FDA) has not yet approved Kratom for any medical use.

Hallucinogenic drugs are commonly found in plants and fungi, or are synthetically produced in illicit laboratories. These substances are typically taken orally or smoked.

LSD, also known by its street names “acid”, “dots”, and “mellow yellow” is an extremely strong hallucinogen produced in a lab and sold on the street.

LSD is used by adding the substance to an absorbent paper and divided into square dosage units or “tabs”.

When ingested, people will experience a distorted perception of shapes, colors, and sounds. Elevated heart rate, body temperature, and psychotic episodes are common effects of this drug.

MDMA, also known on the street as ecstasy or molly, is a psychedelic drug that produces distortions of time and perception, and often enhances enjoyment of tactile experiences.

People may swallow molly tablets or crush them for insufflation. There is limited evidence that smoking or injecting ecstasy is a common method of abuse.

Psilocybin is a hallucinogenic chemical derived from certain types of mushrooms. The mushrooms may be fresh or dried and ingested orally through a tea or adding them to other food.

The physical effects of mushrooms include nausea, vomiting, muscle weakness, and intense hallucinations to the point you may be unable to discern fantasy from reality.

DMT is a hallucinogenic chemical that occurs naturally in many plants and animals, including humans. When taken, DMT produces an intense visual and auditory hallucinogenic experience.

While DMT has no approved medical use in the United States, it is commonly used as part of shamanic rituals in South America. It is consumed by smoking, snorting, or orally ingesting it in brews such as ayahuasca.

The main effect of DMT is an altered sense of space and time. Possible additional side effects include chest pain, agitation, dilated pupils, dizziness, diarrhea, and vomiting.

Other Substances Of Abuse

Not all harmful drugs are provided with prescriptions or bought illegally on the street. Some potentially deadly and addictive drugs may be found at home or bought over the counter.

Inhalants include chemicals found in household products that produce vapors. When these vapors are inhaled they can induce mind-altering effects.

OTC drugs are also known as nonprescription medications. They are intended to treat symptoms of mild to moderate pain or discomfort due to illness or injury.

The effects of these drugs may vary when abused, but can often lead to potentially fatal outcomes such as liver or kidney failure, coma, and irreversible brain damage.

Alcohol and prescription or illicit drug use can eventually lead to drug dependence, drug-seeking behavior, withdrawal, and overdose.

There are treatment facilities throughout the United States that provide the help you need to avoid these potentially fatal outcomes.

Treatment plans may include:

Evidence-based treatment programs can help people overcome the powerful cravings of substance use withdrawal in a safe and secure environment while surrounded by healthcare professionals.

The frequently asked questions below may help answer your questions about drug addiction.

How Do I Know If I’m Addicted To Drugs Or Alcohol?

If you find that you can’t function without using drugs or alcohol, or you experience withdrawal symptoms from stopping use of substances, you may have a substance use disorder.

Are Some Substances Worse Than Others?

Yes. Some substances such as opioids, alcohol, and amphetamines, among others, have a much higher abuse potential and may cause much more serious harm to a person’s mental and physical health.

Can I Die From Addiction?

People with substance use disorders can die due to side effects caused by the condition — such as organ failure, overdose death, and a range of others.

To avoid a potentially life-threatening situation, people who abuse substances may get treatment at an evidence-based rehab program that can help them overcome their addiction.

Call our helpline today for more information on substance abuse. Our team can assist you in finding a treatment provider that will put you or your loved one on a path to sobriety.