Caffeinated alcoholic beverages were popular in the early 2000s. Today, mixing alcohol with energy drinks like Red Bull is also a popular trend. Unfortunately, data shows that mixing the two can be dangerous, in part due to stimulants’ ability to mask the effects of alcohol without sobering you up. 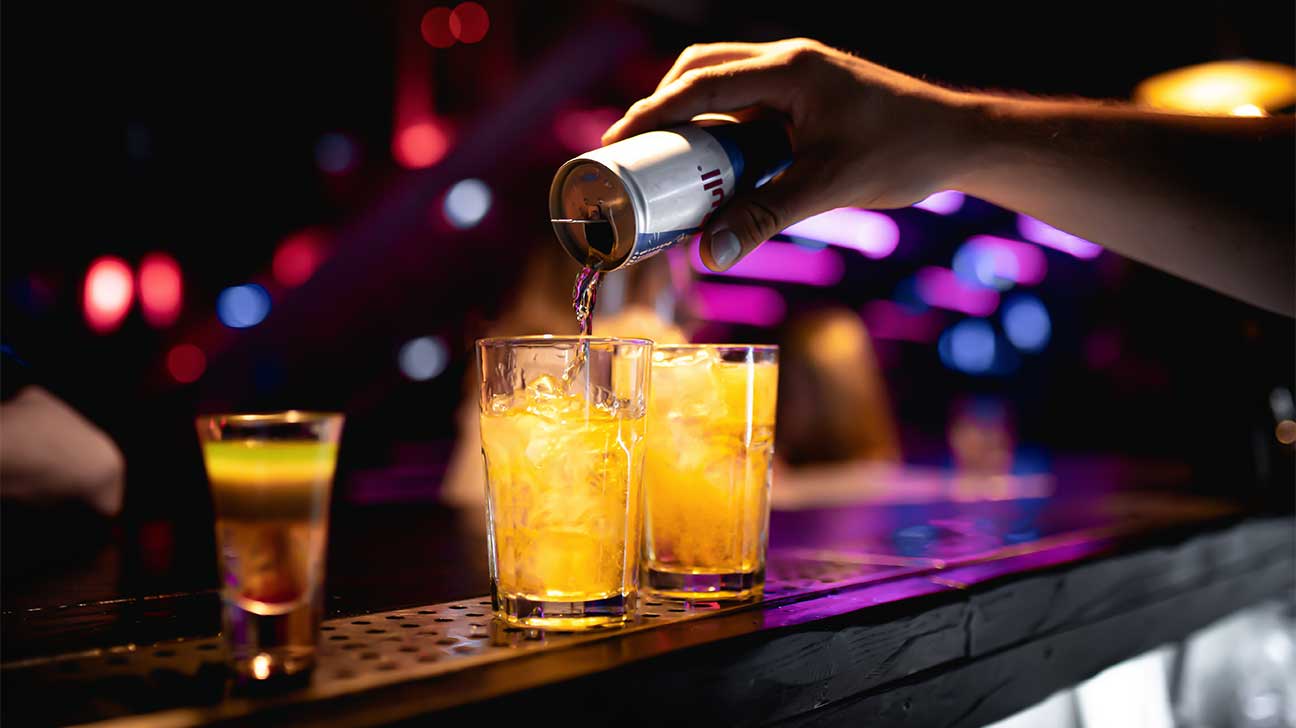 Alcohol is a depressant that, when consumed, can cause a feeling of relaxation, as well as drowsiness and sedation in high quantities. Energy drinks, on the other hand, do the opposite.

Drinking alcohol can slow you down. The stimulant effects of energy drinks can wake you up.

However, the Centers for Disease Control and Prevention (CDC), as well as other health experts warn that mixing the two can create a dangerous combination. Here’s what you need to know:

Is Mixing Caffeine And Alcohol Safe?

The risks and potential dangers of mixing caffeine with depressants like alcohol have been well-documented.

In 2010, the FTC and U.S. Food and Drug Administration (FDA) sent a letter to manufacturers of caffeinated alcoholic beverages warning them that adding caffeine to their drinks could be a violation of federal law.

That letter cited evidence that these drinks posed “unusual risks to health and safety,” in part due to their high alcohol content and ability to mask the intoxicating effects of alcohol.

At that time, caffeinated alcoholic beverages — for example, Four Loko — were popular, especially among college students and other young people.

Side Effects Of Mixing Alcohol And Energy Drinks

Drinking alcohol and caffeinated energy drinks like Red Bull has become a popular partying trend, as a way to counteract the depressant effects of alcohol and stay awake late into the night.

Unfortunately, this combined alcohol-energy drink consumption can be dangerous. And contrary to popular belief, it does not help you “sober up.”

While energy drinks can cause greater alertness and wakefulness, they may also mask the intoxicating effects of alcohol.

Some describe this as a “wide-awake drunk” state. When this occurs, a person may be less able to tell how drunk they are, and may be more likely to drink excessive amounts of alcohol.

The side effects of energy drinks and alcohol combined may include:

What Are The Risks Of Mixing Alcohol And Energy Drinks?

According to research, people who combine alcohol and energy drinks are more likely to engage in unsafe or risky behaviors due to the false sense of security that the combination can provide.

Alcohol can cause physical impairment and reduce your ability to make safe, rational decisions.

Energy drinks can mask these effects, particularly the physical effects of intoxication, which may cause a person to believe they are less drunk than they actually are.

According to the CDC:

Understanding the potential negative effects of alcoholic energy drinks is important, and it’s best to avoid this combination when possible.

If you or a loved one is drinking heavily, and engaging in unsafe drinking behaviors, it may be time to consult a doctor or a healthcare provider who treats alcohol abuse and addiction.

For more information about signs of substance abuse, alcohol use disorder, or how to find an alcohol treatment program near you, call our helpline to speak with a specialist today.